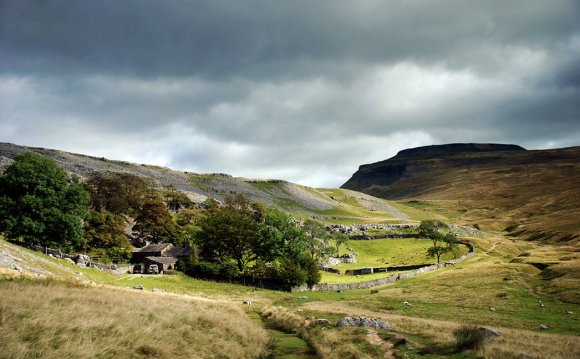 The rain is crisping towards hail as it lashes a squat building in the West Yorkshire countryside. Inside, Brian Donnelly, known to a community of fans around the world by the alias KAWS, is installing a family of recent sculptures.

The head of each figure bears traces of a skull and crossbones – blobby bones take the place of ears and a frill of teeth stands in for the mouth, while their dead-men’s eyes are X-marks-the-spot crosses. It’s a cartoon pirate signature that makes them instantly recognisable as the work of KAWS.

The group in the gallery are diminutive siblings to a quintet of gargantuan figures installed on the other side of the valley in the Yorkshire Sculpture Park’s lakeside gardens. “I love it, ” enthuses Donnelly. “I love the photos you can get from it and the rolling hills and these giant wooden pieces among all the trees.”

As a pioneer of art-as-brand, with an eye-catching practice that draws heavily on urban artforms and a synthetic aesthetic, this is an incongruous setting for the New York-based artist’s first major UK show.

A week ahead of the opening, the installation team is laying fresh turf around the plinths, and stabilising paths churned up into gritty mud by the cranes and trucks used to piece together the weighty hardwood sculptures, the largest of which – Small Lie (2013) – stands at 10 metres tall.

The characters in this exhibition have been part of the KAWS lexicon since his days as a graffiti provocateur in the 1990s, when he gained recognition modifying ads on the sides of phone booths in New York. Companion, Accomplice, Chum and Bendy – riffs on Mickey Mouse, Bugs Bunny, the Michelin Man and a giant spermatozoa – have been conveyed in spray paint, oil on canvas, T-shirt graphics and collectible toy form, eventually expanding, in the past decade, to become super-sized works of sculpture.

Their relationship to Donnelly hovers somewhere between avatar, id, conscience and inner child. The largest figure in the gallery is a five-metre-high Companion sitting with his head in his hands, originally commissioned for a ferry port in Hong Kong, and suggestive of the artist’s own tendency to feel isolated in a numb crowd.

“I went on a site visit to Kowloon and there was just a sea of people, ” recalls Donnelly. “It’s easy to pass people sitting on the street like this all day long – you don’t think twice – but when you see something on that scale you might stop and think a little more about what’s going on.”

A neighbouring Companion – this partially dissected to reveal neon inner organs – is shown reclining. Its pose might recall, at a push, Antonio Canova’s sleeping Endymion, but for Donnelly the composition sprang from simple empathy: “I was just thinking about giving the figure a break. This toy’s sat on my shelf for some years and I pictured him relaxing.”

Donnelly was shod in fresh white Vans when he visited the Yorkshire Sculpture Park last summer, but he’s not making that mistake again. Today he’s wearing heavy-soled walking boots. Their label is not evident, but it’s fair to assume that like many things Donnelly comes into contact with, they are obscure, limited-edition and highly covetable. A slight figure, and so softly spoken that at times his voice barely registers on a recording mic, Donnelly is nonetheless a member of that informal international club that defines a certain kind of 21st-century man-into-boy cool.

Peter Pan-like figures, they dictate an object fetishism that draws on the accoutrements of teendom and young manhood: graffiti, skateboarding, figurines, cartoons, sneakers, rare bands, rare brands, and other things that broadcast in-the-know-dom.

In the late 1990s, Donnelly shifted his focus from the telephone booths of New York to the savvy young entrepreneurs of Japan with whose eye for detail, urge to collect, and cool kid nerdiness he felt kinship.

In Tokyo, he began producing collectible toy figurines, started his own brand (Original Fake), and collaborated with fashion houses, of which the most notable was BAPE, a label that was the apex of desirability for a certain tranche of hip and rarefied consumer. BAPE also had a gallery, and it was there that Donnelly first showed artworks of scale.

Thanks to Donnelly’s decision to focus his energies on “product” rather than traditional artworks, the US art system, until very recently, gave him short shrift. His Original Fake brand was so popular that he “killed it” because it was taking over his life, but eight years ago he couldn’t get gallery representation in his home country.

Walk in the West Yorkshire Countryside