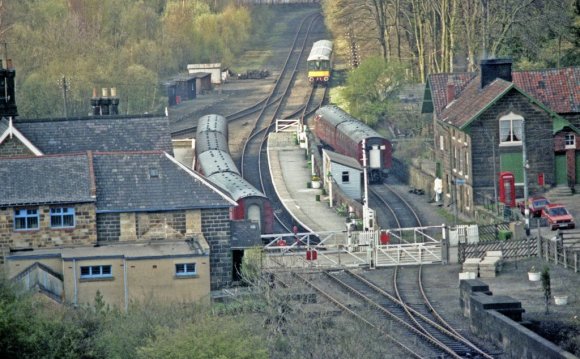 Grosmont, Monmouthshire. The name may mean Great Hill and be, not Welsh, but Norman. If so, it makes clear the character of much of Monmouthshire. It lies by the Monnow river and close to what is now the border with Herefordshire. A little further North, Pontrilas, in spite of its Welsh name, belongs to Hereford Abbey Dore is also technically English. Between them lies Ewyas Harold, a small village that keeps alive two facts of history: that this region formed part of the wholly Welsh province of Ewyas, and that, before the Norman came, Harald Earl of Hereford, successor to Edward the Confessor as King of England drove into the Deheubarth in the middle of the 11th century and seized much of its territory. The Herefordshire village of Kilpeck, with its church as an outstanding example of the architecture of the mid-l2th century, is a monument to the second fact. For its detailed sculptural decoration, inside and out, with grotesques of men and beasts, including some that are wholly pagan, seems to be inspired not by Welsh or Saxon ideas but by the tradition of the Norse settlers in Kent and Sussex whom Harald transferred to Ewyas for the purpose of keeping the natives in subjection.

Although reckoned an English village, Abbey. Dore is again of Welsh name and connection. It stands in the Golden Valley, which is in fact the Water Vale, for it was the Norman who mistook the Welsh “Dwr” (Water) for his own “D'or” (Golden). Its church is the successor to the original Cistercian monastery founded by a great grand-nephew of Edward the Confessor, and is another startling example of intricate decoration. But Grosmont represents another chapter in the history of Monmouthshire. It belongs to the Trilateral, or three-pointed stronghold, set up by Norman Lords of Abergavenny to maintain their grip on the country.

Grosmont is now no more than a quiet and reminiscent village; yet it ceased to be a borough only in 1860. In medieval times it was a place of great importance, and the l4th century church confirms this. It is an ambitious structure, not of the kind that would suit a simple village, but with transepts, aisles, chancel, and chapel. The tower is octagonal, with a beautifully balanced spire; the nave arcade is massive but unfinished.

Grosmont Castle mounted guard over the Golden Valley with its two companions, Skenfrith and the White Castle. It was the most carefully considered of the three but its stormy history has left only the inner ward gateway, the keep or central strong-point, and the containing wall with two drumtowers. These are not original, but date from a rebuilding by John of England or Henry III, the first structure having been demolished by the Welsh. Even so, the remains are magnificent, and the chimney of the banqueting hall is a remarkable evidence of its garrison strength. It was in fact occupied by Henry III himself; for the discontent of his baronage with his preference for foreign favourites encouraged Llywelyn the Great to invade, supported by several Border Lords. Henry had his wife with him, since he felt the needs of the war required his personal presence there for a long time. Llywelyn made a surprise attack by night and captured the Castle, driving the King and Queen with their noble supporters out into the darkness in their nightshifts. But time has its revenges: at Grosmont 170 years later Rhys Gethin, holding the place on behalf of Owain Glyndwr, was signally defeated by Harry of Monmouth, later Henry V of Shakespearean note. That encounter, in 1410, may be said to have conclusively destroyed the work of the King of Wales. Owain never fought again, and the rest of his life is said to have been spent in hiding at Monnington Straddel, not far from Bacton, protected by his son-in-law, Sir John Scudamore.

Skenfrith, second in the great Trilateral, is still a place of substance. The third, the White Castle, stands by itself. It can be reached either from Llantilio Crossenny or from Llanvetherine, in the first case by car and the second by foot. It is, outwardly at least, in a state of almost perfect preservation, It is of Edwardian type: a six-sided enclosure within deep walls, a drum-tower at each angle, the North wall being short and drawing its towers close together, covering the main entrance. The curtain wall seems to have sheltered the sleeping-quarters of the garrison, since this was no place for residence but a strictly military outpost. Its isolation, and the effect it gives of remaining much as it was when first built, make the White Castle exceptional even among the always romantic castles of Wales. Carreg Cennen is remarkable for its site on an impregnable crag above its river; this castle, in a gentler region and on smoother slopes, makes its own strength and defiance of time even more manifest.

Derbyshire Dales tour: The Queen and the Duke of Edinburgh