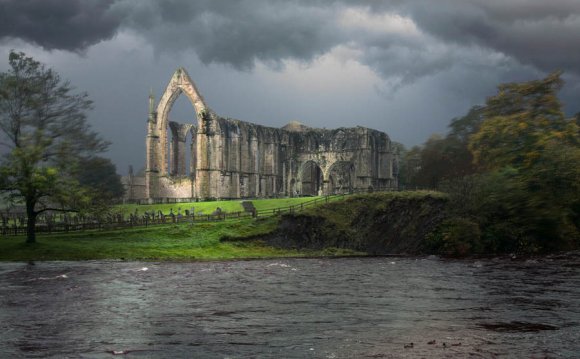 In about 1120 a group of black-robed Augustinian canons and their Prior set up a small religious community in the nearby village of Embsay, two miles from Skipton. Some thirty five years later, in 1154 or 1155, they decided to move and make a fresh start in the more accessible and sheltered pastures by the village of Bolton. It was Lady Alice de Rumilly of Skipton Castle who gave them the land on which to build the Priory, ‘for’, as she put it, ‘the salvation of my soul and those of my predecessors and successors’.

The Augustinian canons soon became accepted by the villagers and the people of the surrounding area. They not only lived together like monks but were also ordained priests, and so were very much involved in village life. They preached, taught, ran a hospital, sheltered travellers and ministered to the local community who came to worship in the Priory. However, their prime duty was a continuous round of prayer and worship, seven times a day, seven days a week, starting with Matins for which they left their beds at 2 a.m. Their priorities were summed up by their guidance ’Before all things, dearest brethren, let God be loved, then your neighbour, for these be the commandments that are chiefly given to us’.

As the reputation of the community grew, it attracted donations from other wealthy patrons who asked the canons to pray for their own souls. This money was wisely invested in a number of farms, mills, lead mines and other enterprises, which in turn brought in extra income from tithes, rents, and the sale of produce. With some of the proceeds, the canons paid groups of travelling masons to extend their living quarters and to construct a great church, as impressive and beautiful as any being built in England at that time. The Priory’s walls still bear masons’ marks, these being the so-called ‘sign manual’ (or in modern language, the ‘signature’ or ‘logo’), of each particular craftsman.

Over the centuries the Priory grew and prospered, despite occasional setbacks caused by raiding Scots, severe winters, agricultural disasters and the Black Death from to 1348 to 1350. Yet gradually, the developing commerce and markets of the local towns offered more and more employment to young men who might otherwise have taken vows and entered the religious life. As a result, and in common with most other monasteries, the numbers of canons dwindled, eventually being outnumbered by the lay brothers who were paid to do the manual and clerical work within the Priory and its outlying properties. Bolton Priory, with its great wealth but tiny religious community, was, like many similar monasteries and nunneries, increasingly the target of a monarchy whose finances were under great strain. Henry VIII’s desire for a divorce led to a political rift with the Papacy; the influx of New World gold and silver into Spanish and Portuguese coffers caused a global financial inflation that reduced the value of the deposits in England’s own Treasury; these two factors, plus the revolt against the Catholic Church led by Martin Luther on the Continent, led to Henry VIII’s 1539 Dissolution of the Monasteries.

Their commercial assets were seized and sold in order to replenish the royal coffers; the furnishings and fittings from the monastery buildings were likewise disposed of. Even lead stripped from the monastic roofs was sold, which, with the help of the English weather, ultimately caused the buildings to disintegrate.

This could have been the end of the story for Bolton Priory. Like most other English monasteries, it could have become one more of the many picturesque ruins that adorn our countryside. However, what saved the Priory was its status as an Augustinian institution. Because its canons were not merely monks but also priests, with pastoral responsibilities in the surrounding community, and because it was the only church in the area, the Priory was allowed to keep half of the church intact as the parish church for Bolton village.

Work on the great West Tower, started in 1520, was of course abandoned; the canons were pensioned off into retirement; the outer buildings were stripped of saleable items; and most of the estate was sold to the Clifford family (to pass later to the Cavendish family, the Dukes of Devonshire). But Bolton village’s parish church continued in its smaller building with new Protestant clergy, a new English-language Bible, new forms of worship and a new east wall separating the nave from the remaining ruins.

Like most English parish churches, the Priory experienced the ebbs and flows of religious fashion. Box pews, galleries and whitewashed walls came and went; the Gothic Revival dawned and the Priory began to recover some of its former beauty.

Pugin, a leading figure in the Revival, designed the new stained glass windows in the south wall in 1851. The distinguished architect, George Street, was put in charge of a major restoration from 1867, the results of which can still be seen today in the pews, the font and the sanctuary. By 1880, the east wall had been rebuilt and decorated with some very original and symbolic wall paintings.