B&B in the Yorkshire Dales 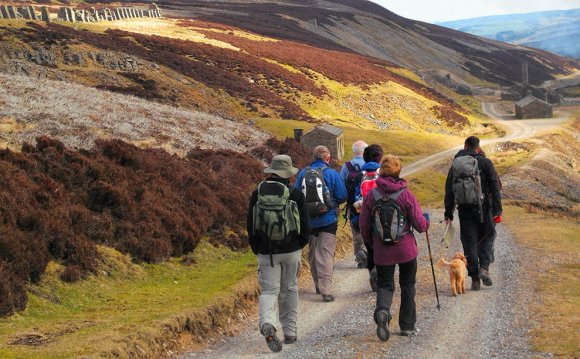 Wensleydale, the largest of the Yorkshire Dales, is formed by the valley of the River Ure which rises some six miles west of the small market town of Hawes. The town's name derives from 'Hause' meaning a narrow neck of land, and it is located at the end of Buttertubs Pass, a natural pass with limestone features that are said to resemble tubs of butter. The pass links Wensleydale with Swaledale to the north.
Fossdale Beck, one of the many streams that feed the Ure, rises on Great Shunner Fell and further down its course, pours over a limestone cliff to form a 99 ft single drop waterfall known as Hardraw Force, the highest single drop fall in England.
Hawes is also the home of the Wensleydale Creamery which makes the famous Wensleydale Cheese. It is said that cheese making was brought to Wensleydale by French Cistercian monks and after the Dissolution of the Monasteries in the reign of Henry VIII, their cheese making skills passed into the hands of local farmers which eventually lead to the development of the present creamery at Hawes in the nineteenth century.

East of Hawes, the River Ure is joined from the south by the River Bain at Bainbridge. In historic times this was within the forest of Wensley and was used as a hunting park by the Lords of Middleham Castle.
The Romans had a lookout station close to Bainbridge, on a hill at nearby at Addleborough and an Ancient British chieftain is thought to be buried in a cairn close by. Further up the Bain is Semer Water, a small lake, which according to legend once drowned the village of Bainbridge after the village refused charity to a beggar.

Across the other side of the river from Addleborough is Askrigg - a Viking place name which means a ridge where ash trees grew. It was later an important market town and a market charter was granted in 1587. The land around Askrigg was traditionally the home of the Metcalfe family who lived at nearby Nappa Hall. Mary Queen of Scots was once imprisoned in the house, possibly before she was moved to Castle Bolton further down the dale.

Aysgarth is famed for the Aysgarth Falls, a series of waterfalls stretching over a half mile section of the River Ure. The falls are in three parts called the upper, middle and lower falls. Aysgarth is a Viking name deriving from 'Ayks kerth' meaning a gap in the hills where oak trees grew.
To the east of Aygarth near the village of Swinithwaite on a hill overlooking Temple Farm, can be found the remains of the Knights Templars' Chapel where several interesting graves can be seen. The military-religious Order of the Knights Templar was founded in the twelfth century for the purpose of protecting pilgrims journeying to and from Jerusalem. It was introduced to Britain in 1146. It acquired land on Penhill to build its chapel dedicating it to 'God, the Virgin and St. Catherine.'
St. Catherine, the patron saint of linen weavers was important to the Knights Templar because their outer garments were made of white linen on which was sewn a blood red cross, their symbol of martyrdom.

The Order attained considerable wealth and it was this that eventually led to their downfall. Kings and Popes alike grew jealous of their influence, and they were subjected to much persecution. Pope Clement V abolished the Order in 1312, Edward II having seized all the property of the English Templars in 1308.
Most of the Knights were imprisoned, tortured and executed.

Castle Bolton village to the north of Wensley is the home of Bolton Castle, a spectacular mediaeval fortress. It was built in 1399 by Richard le Scrope, 1st Lord Scrope of Bolton and Lord Chancellor of England. Bolton has never been sold, and remains in the private ownership of Lord Bolton, Richard le Scropes' descendant. The Scrope family history stretches back for more than 900 years to Richard, a Norman land owner and a favourite of King Edward the Confessor.
The family's first recorded involvement in Wensleydale was in 1149, since when they continued to play a significant role at the heart of national politics. However, Richard's eldest son, Sir William, who obtained the kingdom of the Isle of Man in 1393 and was later created Earl of Wilts and Treasurer of England, was executed in 1399 for treason after he took a leading role in repealing the patent given to Henry Bolingbroke, Duke of Hereford, while his father, Henry IV was in exile.

This was a major setback for the family and Richard only managed to retain the castle and his lands after appearing before Henry's first parliament and imploring his sovereign not to disinherit himself and his remaining children. Sir William received a mention in Shakespeare's play Richard II, as did his brother, Sir Stephen, who served as Justice of Munster from 1401.

The Archbishop of York, another of the Scrope family, officiated at the Coronation of Henry IV in 1399. He was executed for his part in Harry Hotspur's plot against the king, as was his nephew, Sir Henry, for his part in the Earl of Cambridge's revolt against Henry V.
Sir Richard, the third Lord Scrope, fought at Agincourt and also gets a mention by Shakespeare in Henry V and the 5th Lord Scrope, Sir John, fought on the losing side at the Battle of Bosworth but unlike his ancestor, he escaped with a pardon. The 8th Baron Scrope, John Scrope, fell from favour by supporting the catholic rebellion during the reign of Henry VIII, giving refuge to Adam de Sedberg, the last Abbot of Jervaulx, who was subsequently caught and executed (see below).
From July 1568 until January 1569 Mary Queen of Scots was held prisoner in Bolton Castle and is said to have escaped for a brief period before being recaptured near Leyburn.

he market town of Leyburn lies to the east of Wensley and one of its main features is the Shawl, a natural limestone terrace almost a mile long which overlooks the town. From the top of the Shawl there are excellent views of a large part of Wensleydale including...

A ride in the Yorkshire Dales