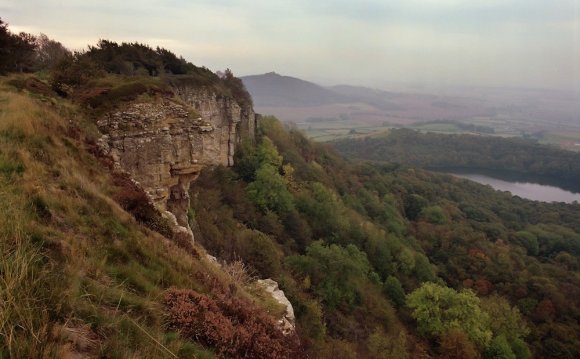 The hill is the site of one of the most important prehistoric monuments in the region—a massive hillfort built in the Iron Age, around 400 BC. It was the approximate location of the attack of the Scots in a major victory Battle of Old Byland they defeated the forces of King Edward II and John of Brittany, Earl of Richmond.

Because it faces the prevailing westerly winds, Sutton Bank has been used for ridge soaring since the early 1930s for the sport of gliding. The Yorkshire Gliding Club is based at the top of the hill.

Also at the top of the hill is the Sutton Bank National Park Centre, where a high-tech Lime & Ice exhibition tells the story of how the iconic landscape and view came to be through the dramatic action of ice age glaciers. There is also an official tourist information centre, a tea room and a gift shop. Outside, there is a car park, from where pushchair and wheelchair friendly paths leading to a viewing platform, which offers views of Roulston Scar, Hood Hill, Lake Gormire and beyond. There are many legends about Lake Gormire, one of which is that there is a submerged village beneath its waters.

The North York Moors National Park Authority has developed new cycle trails, which use a mixture of natural and man made trails similar to those found in a purpose built trail centre. Using the same style of trail marking, the mountain biking trails available are:

Sutton Bank is an official Dark Sky Discovery Site, one of two in the North York Moors.

Me gliding over North Yorkshire

On Top Of The World ~ on and around Sutton bank Near ...