Bed and Breakfast in the Yorkshire Dales : North Yorkshire

Bed and Breakfast in the Yorkshire Dales 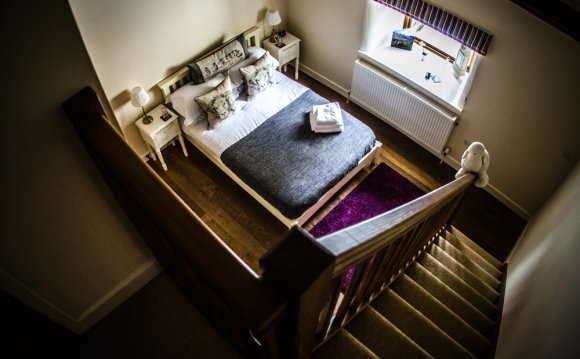 There has been a manor house at Hellifield for over 1000 years. The earliest structure was a Saxon Aisled Hall House, probably erected in about 850AD. The post holes to this building were discovered by Cathy Tuck, our Archaeologist, whilst carrying out excavations on site prior to the restoration work. The next phase in the building history was in mid 12th Century i.e about 1150; the existing Saxon Hall House was enclosed in stone. This was a demonstration of wealth by the new lord. The outline of the end gable of this structure can still be seen in the east elevation of the house. This ‘Norman Manor’ house would have looked very similar to Boothby Pagnall Manor in Lincolnshire. In the 1250’s a solar tower was added to this Norman Manor by Elias de Knole. This would have been a small antechamber to the main hall and first floor chamber - the two small bedrooms are the oldest rooms in the house. The ground floor room shows traces of the vaulting. The upper stone barrel vault was rebuilt as part of the restoration.

In the late 14th Century the building of Peel Towers up and down the country has been historically linked to Scottish raiding parties on regular jaunts after the English lost the battle of Bannockburn. Certainly there are records of the Scots raiding Gargrave and Skipton and there was a massacre nearby at Coniston Cold. The Peel Tower is reputed to have seen action, but whether this is the case, I doubt we shall ever know. There is a suggestion (Sidney Kitson) that the 5 acre lake above the Peel was created by damming up the beck and was designed to flood the valley around the Peel Tower in order to make the Tower impregnable. The Tower would have been protected additionally with bales of wool to reduce the impact of cannon shot, although it must have smelled terrible and would have been a fire hazard. During this period, legend has it that a network of tunnels was built - all the usual hyperbole about links with halls miles away, etc. But there is a network of tunnels, and no one knows the dates of construction or why they were built.

The main house dates from 1314 to 1330 and was built by one of the last Templar Knights, Sir John Harcourt. This tower would have included what is now the dining room and sitting room, the upper floors of our bedroom and the second floor Chapel, although the original Peel Tower would have had vaulted cellars which were filled in the 18th Century. The name Peel is a corruption of pale; a safe enclosure. These would have been wooden fencing, palisades; to be outside the safe are would have been ‘beyond the pale’.

The ownership of Sir John Harcourt also marks the joint Lordship of Hellifield Peel with suppression of the Knights Templar. Most of the Temple cameras and land passed to the Knights Hospitaliers. They remained joint lords until the suppression of the monasteries by King Henry Vlll in the 1530’s. Hellifield Peel was used as a magistrate’s court until the early 16th Century as a result of the Hospitaliers’s Lordship.