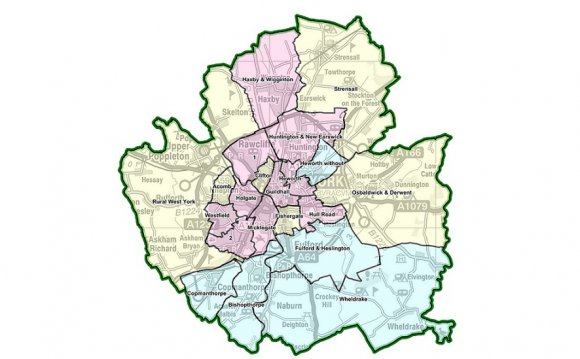 Yorkshire is the largest county of them all by far. It stretches from the North Sea coast deep into and over the Pennine Mountains, and from the River Tees to the Humber and further south inland. It encompasses empty moorland and crowded conurbations, high fells and low plains. It is a county with a strong character and identity of its own. Yorkshire is divided into three ridings, whose boundaries meet at the walls of the ancient city of York. York is in the middle of the shire. It was a great city even in Roman times (the co-capital of Britannia). It is a delight of mediæval streets, and at its heart its huge and delightful cathedral, York Minister.

The East Riding: The East Riding lies along the coast of the North Sea and the Humber. It is low-lying country in contrast to the other ridings, rich agricultural land. In the centre are the Yorkshire Wolds, an undulating chalk plateau which never rises above 900 feet. Holderness is a flat, broad triangular land between the sea and the Humber. It comes towards a point and a narrow whip of land ending at Spurn Head. The coast of the Humber estuary is flat, windy ground. The Humber is a great commercial gateway, and at its heart the City of Kingston upon Hull, usually known just as Hull, a large port and industrial city. North of Hull, Beverley is a quieter town with the famous Beverley Minster. The coast describes a smooth line along Holderness and a smooth sandly curve up to Flamborough Head and beyond the lofty chalk cliffs up to Filey Bay. The gentle Derwent valley forms the boundary with the North Riding.

The North Riding: In the eastern part of the North Riding are the hills of the North York Moors. The Cleveland Hills in this area plunge down to the sea at Whitby, home of Whitby Abbey, fishing and bracing holidays. The Cleveland coast is marked by the high cliffs that give it its name, Boulby Cliff being one of the highest in England. Wooded valleys, the wykes, tumble down from the high moors to the sea. In between pretty fishing villages such as Robin Hood’s Bay and Staithes nestle under the cliffs. The mouth of the Tees, at the very northern bounds of Yorkshire, is an industrial centre. The main town being Middlesbrough, a port and factory town that grew from nothing in the nineteenth century but from which now a small conurbation has grown, stretching down to the seaside town of Redcar. The industry on the Tees took wing from the coal of County Durham and the iron ore mined in the northern hills of Cleveland. The Tees marks the boundary with County Durham. The western part of the Riding is in the Pennines, with wild, often breathtaking scenery. Here (in the Lune Forest in Upper Teesdale) Mickle Fell stands at 2, 591 feet, the highest point of Yorkshire. Southward are the Yorkshire Dales, rightly renowned for their beauty. In Swaledale are the old town of Richmond and the immemorial garrison town of Catterick. In Wensleydale runs the River Ure, noted for waterfalls, the forces, and delightful villages. In the upper part of Wensleydale is Hawes, home of the infamous Wensleydale Creamery . Lower down are the haunting ruins of Jervaulx (or Ure Vale) Abbey. Between the Pennines and the North York Moors is the Vale of York, a broad, low fertile land fed successively by the Swale, the Ure and the rivers of the West Riding and running down to York and the Humber plains.

The West Riding: The West Riding is the biggest of the three. It consists of a largely urban south and a rural north, though the division is not clear cut; in among the industrial towns in the south of the riding are many picturesque villages giving the quintessence of the ordinary Briton’s understanding of Yorkshire, including Haworth – home of the Brontë sisters. Leeds is the commercial and financial centre of Yorkshire. Leeds is an ancient town but its rapid growth is only since the industrial revolution, building itself first on wool manufacturing but then with all industry. Bradford has grown with it. South of these two great cities are many other industrial towns, the whole area knotted in A-roads and motorways. South of the Leeds and Bradford area is another major city; Sheffield. Sheffield is built on steel and the coal underneath which powers it mills. Sheffield has been famous for its steel since the middle ages but the nineteenth century saw explosive growth, the city climbing unchecked over the steep slopes of its seven hills and spilling over into Derbyshire. Doncaster, another industrial town, lies north-eastward. Away from all this the West Riding shows its best parts. Some of the loveliest of the Yorkshire Dales are in the West Riding, including Nidderdale and Wharfdale. In the northwest the Riding scales the Pennines, including the peaks of Ingleborough, Pen-y-Ghent, and Great Whernside. The West Riding stretches out to Sedbergh, only fifteen miles or so from the west coast. Craven is a distinctive area of limestone hills. It is popular among cavers. The Bowland Forest is a high moorland plateau from which becks flow both east and west. Harrogate grew as a spa town, still popular with genteel visitors. Ilkley too is a popular spot, albeit better known for the apparent goings on on Ilkley Moor according to the song. Ripon is a modest city with a fine cathedral, one with remarkably early foundations.