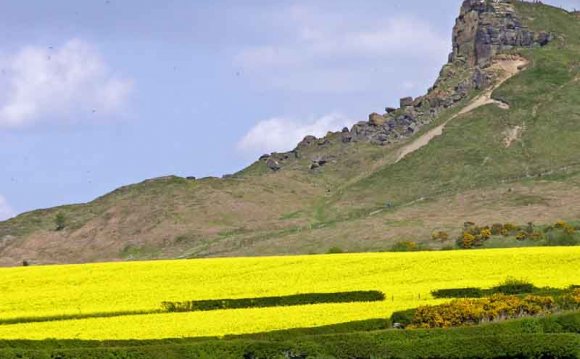 You might be surprised to learn that the North York Moors is one of the most wooded of England's National Parks. Woodland and forest covers about 22 percent of the National Park – that’s over 300 square kilometres of trees – so it’s of huge importance. Woodland also clothes many of the valley sides, giving the landscape a distinctive character.

In our native woodlands, oak, ash, birch and rowan thrive, while shrubs such as hazel and hawthorn provide the understorey. Alder often grows in the damper ground along rivers and streams. Large broadleaf woods are rare but significant woods are still found in the lower parts of some valleys such as the Esk, or at Roxby near Staithes and Mulgrave Woods near Sandsend.

But broadleaved or mixed woodland only accounts for around a third of the woodland in the North York Moors. Instead, plantation woodlands – planted throughout the 20th century – dominate the scene, at least in terms of area. The large coniferous forests of Dalby, Cropton and Boltby are important for timber production and recreation, but they do have a distinctive wildlife, too, including bird species like the nightjar.

Plantations – where modern farming practices have not held sway – have also contributed to the survival of some habitats, such as wetlands and unimproved grassland, and the protection of a rich archaeological heritage.

Some individual trees and woodland areas in the North York Moors are very old. are those that have been in existence for at least 400 years, and are very special. They make up less than 5 percent of the landscape of the North York Moors, but many plants and animals are found nowhere else, so these woods are irreplaceable.

We also have one of the largest concentrations of ancient and veteran trees in northern England. These are trees of a great age for the species – way beyond normal maturity – and these too are priceless reminders of an earlier landscape and a living part of our heritage.

Where did all the trees go?

Woodland might cover around a fifth of the National Park now, but after the last Ice Age ended, about 10, 000 years ago, a forest of Scots pine, oak, birch, hazel and alder trees covered not just the whole Park but almost all of Britain. This ‘wild wood’ was home to many animals, including some that are now extinct in Britain, such as wolves and wild boar.

When the first Stone Age people came to the North York Moors, about 8, 000 years ago, they hunted animals and gathered plants for food. By the Iron Age (about 4, 000 years ago) people were learning how to farm crops and animals. Trees were cut and burned down to make clearings for farms. The population grew and the removal of trees continued. By the Middle Ages, most of the woodland had disappeared.