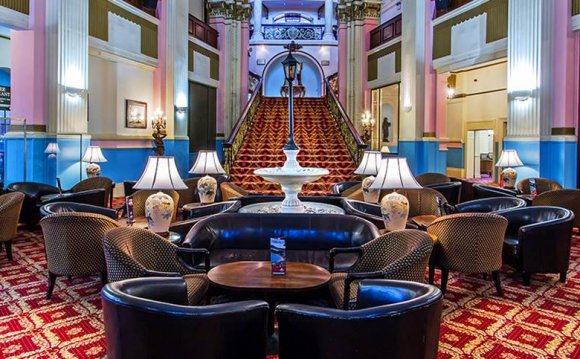 The hotel was designed by the Hull architect Cuthbert Brodrick, who was better known as the designer of several Leeds buildings, and when completed in 1867 was one of the largest hotels in the world, as well as one of the first giant purpose-built hotels in Europe. The hotel's distinctive yellow (also referred to as tawny) brickwork was made locally in Hunmanby and is complemented with traditional red brickwork around the windows.

The building is designed around the theme of time: four towers to represent the seasons, 12 floors for the months of the year, 52 chimneys symbolise the weeks, and originally there were 365 bedrooms, one for each day of the year. Following the renovation the room count was reduced to 280. The hotel itself is in the shape of a 'V' in honour of Queen Victoria. The hotel's heyday was arguably during Victorian times, when wealthy holidaymakers made up the establishment's clientele. As Scarborough was a famous spa town, the building's baths originally included an extra pair of taps, so guests could wash in seawater as well as fresh.

The design has similarities to contemporaries of the period that were stylised as "French Second Empire mode". The windows on the gorund and first floors are round headed. Those on the first floor also have a continuous iron rail balcony. All first to third floor windows have a cornice over the top denoting the floor boundary. The Eaves level windows are located between the projecting brackets for the eaves. The attic windows are squared dormer on the lower level and rounded on the upper. The attic levels, being part of the roof are covered in slate. On the narrow end of the building there is domed structure between the two towers. Facing the sea, the three basement levels can be seen clearly extended the full length of the building. A glass enclosed terrace has been added on top of this. The building was first listed on 8 June 1973 with number 1243163 under the Planning (Listed Buildings and Conservation Areas) Act 1990 as amended for its special architectural or historic interest.

Construction began in 1863 and was completed in 1867, at a cost of over £100, 000. At the time, it was the largest brick building in Europe. The first manager was M. Augustus Fricour, who had previously been in charge at the Hotel Mirabeau in Paris. The grand opening was on 24 July 1867.

From 1887, the hotel forged a link with the local annual cricket festival and allowed guests attending the exclusive use of the old dining room. The connection was extended to the cricket ground in the late 1940s, when staff from the hotel would serve food and drink to the players.

In 1939, the hotel became the home to RAF trainees and the corner cupolas housed anti-aircraft guns.

The hotel was badly damaged when the German Navy bombarded the town in 1914. The bombardment of the town occurred on 16 December 1914 soon after 8 a.m. by the battlecruisers Derfflinger and Von der Tann, accompanied by the light cruiser Kolberg. It was reported that the hotel was hit at least 30 times.

Currently, the hotel caters towards the budget end of the spectrum. The hotel was bought by Butlins, the company better known for its holiday camps, in 1978 and was run as an inexpensive choice of accommodation. In November 2004, the hotel was purchased by Britannia from Grand Leisure Group.

During the first decade of the 21st century, the hotel suffered a number of health and safety issues. Several cases of sickness had been reported in the mid-1990s under its previous ownership, and in 2002, an outbreak of gastroenteritis hospitalised one man and affected more than 200 guests and staff. A month later, 54 people fell ill, leading to ten days' closure to carry out cleaning. In October 2004, a number of guests were quarantined in their rooms because of reports of sickness. In December, the hotel shut for ten days after an outbreak of the Norwalk virus. That incident, in which no one required hospital treatment, closed the establishment for several days. A spokesperson for the North Yorkshire Health Protection Unit blamed the incidents on the age of the building and "bad luck".

In 2006, the hotel was fined £10, 000 after a guest drank water that contained dangerous levels of bleach. In June 2011, seventy guests were affected by an outbreak of vomiting and diarrhoea. The cause was said to most likely to be a viral gastrointestinal infection, but that had not been confirmed.In March 2007, 120 people fell ill with the Norwalk virus; infection control specialists stressed that the management should not be held responsible, as similar outbreaks are commonplace elsewhere.

In 2005, an investigative BBC report revealed several health issues at the hotel, including the presence of E. coli bacteria. This report was branded "sensationalist" by Scarborough council's environmental health officer.

In May 2006, a fire broke out on the sixth floor of the building, possibly caused by renovation work. The hotel was quickly evacuated while local fire crews dealt with what they described as "quite a severe fire". Extinguishing the blaze took over 40 minutes because of the number of stairs in the building and the amount of smoke, which both hampered firefighters' movements.

In September 2006, the management installed extra netting and spikes on the exterior of the building to deter nesting seagulls. The birds, which are regarded as a nuisance in parts of the town, had been disturbing guests with mating calls. Their droppings were also responsible for a significant proportion of the hotel's cleaning expenses.

The hotel has a three blue plaques. One notes that Anne Brontë, the Yorkshire writer, died at lodgings on the site of the current hotel. Another mentions that the RAF trainees during the Second World War were stationed there. Still another commemorates the opening of the building.