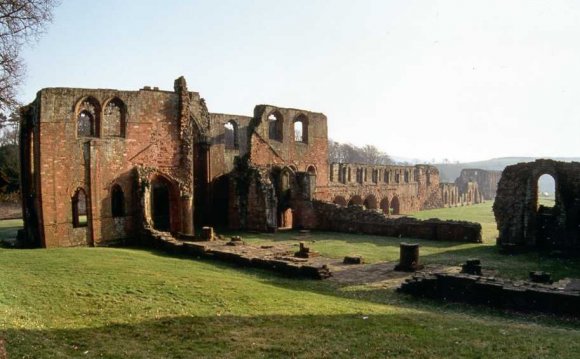 There has long been a tradition of monasticism in the North of England, especially in Yorkshire where abbeys were established as early as the 7th century. Despite repeated Viking raids and the harrowing of the North by William I, these abbeys flourished.

Perhaps the most impressive of these abbeys is Fountains Abbey, famous for its superb setting and extensive ruins. Fountains Abbey lies along the valley of the River Skell about two miles west of Ripon. The Abbey, Britain's largest monastic ruin, was founded in 1132 by thirteen Benedictine monks from St Mary's Abbey in York seeking a simpler life, who later became Cistercian monks. The abbey was named Fountains Abbey because of the springs of water that existed in the area.

Fountains Abbey was very rich and prosperous, and owned vast areas of land across western Yorkshire. Much of its wealth was also based on the trading of wool and lead, two of the Yorkshire Dales' most abundant resources, by the lay brothers.

However the history of the Abbey was not uneventful. William Thirsk, abbot of Fountains from 1526-1536, was executed by King Henry at Tyburn for plotting against the king, along with his friend Adam de Sedbergh, who was the last abbot of nearby Jervaulx Abbey.

Following the Dissolution of the Monasteries in 1539 by Henry VIII, the Abbey buildings and over 500 acres of land were sold to Sir Richard Gresham, a merchant. The property was passed down through several generations of Sir Richard's family, finally being sold to Sir Stephen Proctor who built Fountains Hall in 1611. This Elizabethan mansion was built partly with stone from the Abbey ruins. Today there are two rooms open to the public.

Fountains Abbey is one of the most visited properties of the National Trust. The view of the Abbey ruins in the river valley as you approach is unrivalled. The abbey church survives almost to full height, with the nave and many windows almost to full height. One of the most impressive features of the Abbey is the magnificent vaulted cellarium, over 300 ft long, which forms part of the west range. Many visitors remark on the sense of awe that these extensive and impressive ruins evoke.

The setting of the ruins in the grounds of the Studley Royal Estate is truly unique. Covering 650 acres of park, woodland and ornamental gardens, Studley Royal is a place of great beauty.

The Studley Royal Estate, a separate estate from Fountains Abbey until 1767, was inherited by John Aislabie in 1693. Aislabie was a principal sponsor of the South Sea Company scheme, the bill for which was promoted by him personally. After this vast financial operation collapsed (the South Sea Bubble) he was expelled from Parliament in 1721. He returned to Studley Royal and devoted himself, until his death in 1742, to creating the Water Garden. His work was continued after his death by his son William, who purchased the Abbey ruins in 1767 and landscaped the Seven Bridges Valley and Abbey grounds.