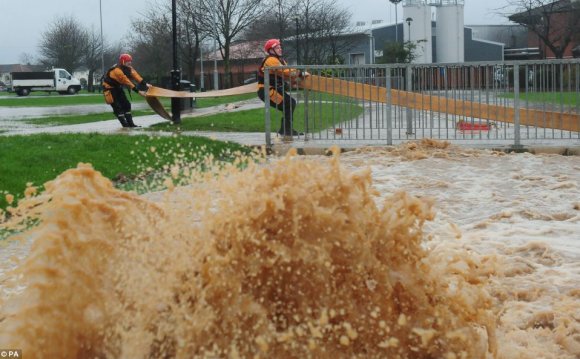 The mansion of Allerton Castle taken in blue skies in August 2013.

1868 view of Allerton Castle, from The County Seats of the Noblemen and Gentlemen of Great Britain and Ireland by Francis Orpen Morris.

Allerton Castle, formerly "Allerton Park" is a Grade I listed nineteenth century Gothic or Victorian Gothic house at Allerton Mauleverer in North Yorkshire, England. It was rebuilt by George Martin in 1843–1853.

It is ten miles (16 km) east of Harrogate and just east of the A1, at its junction with the A59 York-Knaresborough road and a late 20th century block used for education and corporate functions.

The Allerton estate belonged to the Mauleverer family from the time of the Norman Conquest. The nearby church of St Martin contains several tomb-monuments to them. When Richard Mauleverer died heirless in 1692, Allerton passed to his wife, who left the estate to Richard Arundell, her son by her second marriage.

The "Grand Old Duke of York"[edit]

Following Richard Arundell's death in 1758, Allerton passed to Viscount Galway, whose son sold it in 1786 to Prince Frederick, Duke of York, second son of George III and brother of George IV.

He also constructed the Temple of Victory which is today visible from the A1 on a 200-foot (61 m) high hill. According to local legend, the ant-like activity of workers constantly ascending and descending to build this gigantic mound, inspired the famous nursery rhyme concerning the Grand Old Duke of York and his 10, 000 men.

The estate changed hands again in 1805 when purchased by the 17th Baron Stourton, the premier baron in England. The Hon Edward Stourton's family owned the house 1805-1983 (the Lords Mowbray). The contents were sold in 1965.

It then became "Stourton House, and the Catholic peer added a chapel in Gothic style. However, in 1843 his son demolished the Georgian house and engaged George Martin, to build the present house in a Tudor-Gothic style. In 1856 work came to a halt as there was not enough money to complete all the interiors.

In 1983 the house was sold to Dr. Gerald Rolph, an American businessman. The purchase includes the house and gardens but not the surrounding park which was retained by Lord Mowbray. Dr Rolph set about renovating the building to the highest standards, filling the house with furniture and pictures of appropriate scale and splendour.

The estate is now run by the Gerald Arthur Rolph Foundation for Historic Preservation and Education and rooms are available to hire for corporate events and weddings.

A severe fire in January 2005 caused substantial damage to the North aspect of the castle including the main dining room, library, rear entrance hall, two bedrooms and adjoining dressing rooms and bathrooms and the Servants Wing. Restoration work commenced in the spring of 2006 and is now more or less complete. The restoration work by specialist contractors consisted of substantial repairs to the ornate stonework and windows, the installation of new floors at first second and attic levels, significant steelwork and a new roof structure to match existing. Electrical, plumbing and heating installations as well as plasterwork were also renewed.

A short drive leads past a late-18th century stable-block before the visitor is confronted with the Tudor-Gothic Victorian building. The main block is built of dark-coloured stone, with a high tower rising above the entrance porch. The lower brick range to the right houses the Chapel of 1805 and behind are the lower buildings of the service courtyard, dating from the 18th century.

The interior of Allerton was designed on a vast scale, with late-Gothic decoration in the style of Pugin's work on the Palace of Westminster. The early-Victorian craftsmanship and the recent restoration work are of the highest quality.

The galleried great hall is one of the highest baronial halls in England, almost 70 feet (21 m) high, lit from a huge lantern which rises from the centre of the main block. It is adorned by intricately carved oak panelling lit by stained glass windows and has galleried landings whose walls are hung with full-length portraits including works by Michael Dahl and William Dobson.

The hall is central and gives access to the elegant drawing room, the blue-and-white ballroom, and the library with bookcases based on the original designs and restored in the on-site workshop. Most of the original bookcases, together with the books, were destroyed in the fire. The wallpaper was based on one of Pugin's designs for the Houses of Parliament and the ceiling has recently been repainted in the original colours.

The principal staircase opens off the great hall, under another vaulted ceiling hung with portraits of the Mowbray and Stourton families.

The library and dining room occupy the north side of the Hall. The dining room is panelled and has stained glass windows with the arms of the Mowbray and Stourton families. On the huge table, original to the house, are candelabra dating from 1848.

A Wedding Video from Allerton Castle near Harrogate, North ...