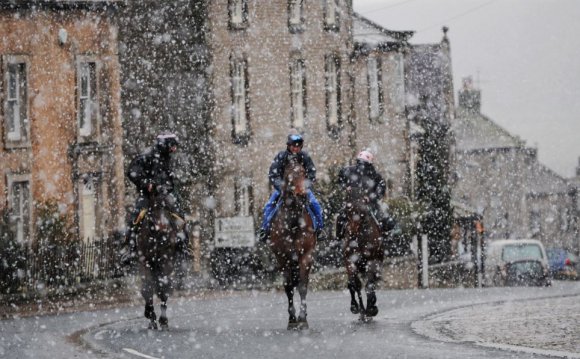 Middleham Castle in Wensleydale, in the county of North Yorkshire, England, was built by Robert Fitzrandolph, 3rd Lord of Middleham and Spennithorne, commencing in 1190. It was built near the site of an earlier motte and bailey castle. In 1270 it came into the hands of the Neville family, the most notable member of which was Richard Neville, 16th Earl of Warwick, known to history as the "Kingmaker", a leading figure in the Wars of the Roses. Following the death of Richard, Duke of York, at Wakefield in December 1460, his younger sons, George, Duke of Clarence, and Richard, Duke of Gloucester, came into Warwick's care, and both lived at Middleham with Warwick's own family. Their brother King Edward IV was imprisoned at Middleham for a short time, having been captured by Warwick in 1469. Following Warwick's death at Barnet in 1471 and Edward's restoration to the throne, his brother Richard married Anne Neville, Warwick's younger daughter, and made Middleham his main home. Their son Edward was also born at Middleham and later also died there.

Richard ascended to the throne as King Richard III, but spent little or no time at Middleham in his two-year reign. After Richard's death at Bosworth in 1485 the castle remained in royal hands until the reign of James I, when it was sold. It fell into disuse and disrepair during the 17th century. It was garrisoned during the Civil War, but saw no action. The ruins are now in the care of English Heritage.

The castle is a compact, massive structure, and though ruinous, most of the walls are intact. A simple rectangle in plan, the castle consists of a massive Norman keep surrounded by a later curtain wall, to which were then added extensive, palatial residential ranges.

The keep is similar to other large square keeps, but had only two stories. It is divided on both levels by an internal wall, and there are turrets at each corner and midway along each wall. The ground floor has two large, originally vaulted, chambers, and above are two grand halls surrounded by high windows. The entrance is by staircase to the first floor—as was common—and a later chapel outbuilding defends that approach. A repaired spiral staircase leads up to the top of the south-east corner tower, affording views of the surrounding town and countryside, including the original castle motte to the south-west.

The 13th century curtain wall surrounds the keep concentrically, making the castle into a compact and effective defensive structure, though it was built more for comfort than security. In the 15th century the Nevilles constructed an impressive range of halls and outbuildings against these walls, turning the castle into a truly magnificent residence, fit for nobles of their stature. Bridges at first-floor level were built to connect these to the keep, and the ceiling above the great hall was also raised, either to provide a clerestory or space for another chamber.

The entrance to the castle is through a tower in the north-east corner, though this was also a 15th-century modification. Only foundations remain of the original gatehouse, facing east into the now-vanished outer ward. Apart from this east wall, however, the circuit of the walls is fairly complete, though the walls of the residential buildings are gone. Some restoration was done on the castle in modern times, but there is extensive damage to the lower faces of the keep. Windows and doorways have crumbled away, floors have fallen in, and none of the battlements remain. Still, the castle is an impressive ruin, and the sense of its original strength and grandeur remains.