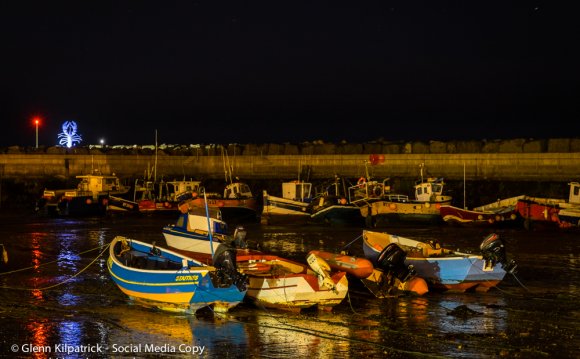 A town and civil parish in the Scarborough borough of North Yorkshire, Whitby sits at the mouth of the River Esk and spreads up the both sides of the narrow valley.

The town dates back to 656, when Oswy, the Christian king of Northumbria founded Whitby Abbey.

The main industries in the 18th century Whitby were shipbuilding and whaling, as well as trade in alum and jet, but tourism and fishing now form the mainstay of the town's economy.

Whitby features in Bram Stoker's novel, Dracula, providing the town with the sort of bona fide goth credentials that have resulted in it hosting Goth festivals every year.

Thanks to the genius of Dr Beeching who closed the direct railway line to Whitby via Scarborough, we ended up taking the circuitous route from London, calling in at Darlington and Middlesborough and other far flung places beside.

We later learn that it would have been much quicker to go to Scarborough on the train and then get the bus up, but whatever: the train's much more fun and we had travel scrabble onboard!

Arriving at the remaining station in Whitby, now bereft of its goods yard, extensive platforms and overall roof.

Looking across the River Esk.

The famous, goth-luring ruins of Whitby Abbey on the hill.

Looking out to sea from our bedroom window.

Marking Whitby's long association with the whaling industry are these two 'orrible old whale jaw bones arranged in an arch. They were presented to Whitby by Norway in 1963. Thanks, Norway.

Looking out to sea.

The monument to Captain Cook features a carving of the Resolution, one of Cook's four ships.

All of his ships - Endeavour, Resolution, Adventure and Discovery - were built at Whitby.

There's some lovely beaches around Whitby and on a Monday afternoon in June barely a soul in sight. Lovely!

The sail-untroubed 40% scale replica of the HMS Endeavour motors by at an unsettlingly nippy speed.

Going for a paddle. The sea was a little on the chilly side, but probably worth a swim if you don't mind shrinking your bits.

People doing something on the near-deserted beach.

The Market Hall, Whitby. Also known as the Town Hall, it was designed by Jonathan Pickernell and built for Nathaniel Cholmley in 1788, whose coat-of-arms furnish the gable.

The Courts Leet of the manor were held in the upper room.