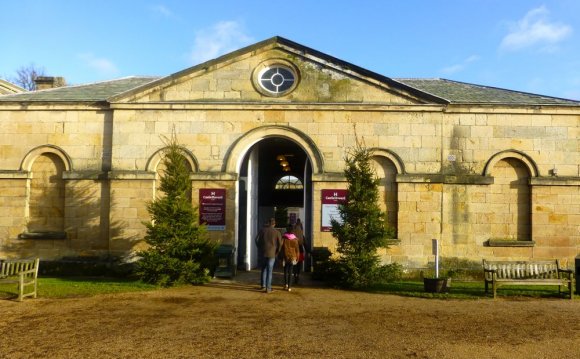 The 3rd Earl of Carlisle first spoke to William Talman, a leading architect, but commissioned Vanbrugh, a fellow member of the Kit-Cat Club, to design the building. Castle Howard was that gentleman-dilettante's first foray into architecture, but he was assisted by Nicholas Hawksmoor.

Vanbrugh's design evolved into a Baroque structure with two symmetrical wings projecting to either side of a north-south axis. The crowning central dome was added to the design at a late stage, after building had begun. Construction began at the east end, with the East Wing constructed from 1701–03, the east end of the Garden Front from 1701–06, the Central Block (including dome) from 1703–06, and the west end of the Garden Front from 1707–09. All are exuberantly decorated in Baroque style, with coronets, cherubs, urns and cyphers, with Roman Doric pilasters on the north front and Corinthian on the South. Many interiors were decorated by Giovanni Antonio Pellegrini.

The Earl then turned his energies to the surrounding garden and grounds. Although the complete design is shown in the third volume of Colen Campbell's, published in 1725, the West Wing was not started when Vanbrugh died in 1726, despite his remonstration with the Earl. The house remained incomplete on the death of the 3rd Earl in 1738, but construction finally started at the direction of the 4th Earl. However, Vanbrugh's design was not completed: the West Wing was built in a contrasting Palladian style to a design by the 3rd Earl's son-in-law, Sir Thomas Robinson. The new wing remained incomplete, with no first floor or roof, at the death of the 4th Earl in 1758; although a roof had been added, the interior remained undecorated by the death of Robinson in 1777. Rooms were completed stage by stage over the following decades, but the whole was not complete until 1811.

A large part of the house was destroyed by a fire which broke out on 9 November 1940. The dome, the central hall, the dining room and the state rooms on the east side were entirely destroyed. Paintings depicting the Fall of Phaeton by Antonio Pellegrini were also damaged. In total, twenty pictures (including two Tintorettos and several valuable mirrors) were lost. The fire took the Malton and York Fire Brigades eight hours to bring under control.

Some of the devastated rooms have been restored over the following decades. In 1960–61 the dome was rebuilt and in the following couple of years, Pellegrini's Fall of Phaeton was recreated on the underside of the dome.

Some were superficially restored for the 2008 filming, and now house an exhibition. The East Wing remains a shell, although it has been restored externally. Castle Howard is one of the largest country houses in England, with a total of 145 rooms.

According to figures released by the Association of Leading Visitor Attractions, nearly 220, 000 people visited Castle Howard in 2010.

In 2009 an underwater ground-source heat recovery system was installed under the castle's lake that halved the heating bill.

Temple of the four winds.

Castle Howard has extensive and diverse gardens. There is a large formal garden immediately behind the house. The house is prominently situated on a ridge and this was exploited to create an English landscape park, which opens out from the formal garden and merges with the park.