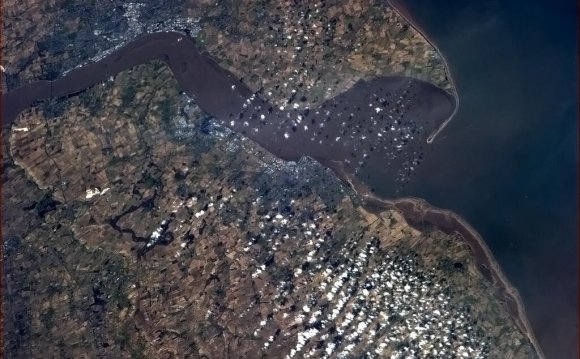 At its source on the North York Moors the River Derwent and its tributaries run over Corallian limestone from the Jurassic geological period. Downstream of Stamford Bridge the catchment area is mainly of Sherwood sandstone from the Triassic period. To the east this sandstone dips under Mercia mudstone, also of the Triassic period. Some of the underlying rocks are major aquifers and provide a valuable source for water supply in the area. The major aquifers are the Corallian limestone, chalk and Sherwood sandstone. The Corallian limestone outcrops on the hills surrounding the Vale of Pickering and is made up of a series of limestones and sandstones. This aquifer is unconfined in parts and gets water from the River Rye and River Derwent through swallow holes.

Rainfall and climate conditions vary slightly across the Derwent catchment area due to the topography. Annual rainfall ranges from averages of 600 millimetres (24 in) at Barmby Barrage to over 1, 100 millimetres (43 in) at its source on the North York Moors.

Course and character of the Derwent catchment area[edit]

For management purposes the catchment area has been divided into ten smaller units. Two of these units (Howe Bridge and Ness) relate to the River Rye which is the subject of a separate article. The other eight, starting at the source, are:

The Derwent starts its course at Lilla Rig on the North York Moors a few miles from the east coast of Yorkshire. After collecting the waters of the Jugger Howe Beck, Black Beck and Troutdale Beck it flows south through the Forge Valley to West Ayton. From there it continues across lower ground to where it is joined by the River Hertford. The Sea Cut, a man made channel, connects the Derwent to the North Sea near Scarborough to alleviate flooding in the lower reaches of the Derwent, downstream of the Cut. This management area is about 127 km² and largely rural with no major settlements. Corallian limestone lies beneath this area. The landscape is upland moors in the upper reaches with lower lying flatter land near Hackness. The river flows through the narrow Forge Valley and several designated natural conservation sites. Water is retained behind a weir at West Ayton and there are sink holes in the river bed where river water is lost to underlying aquifers, so that in drought years the river below the weir may run dry. There are no wastewater treatment works. The ecology and fisheries have a very high sensitivity to changes in water flow.

The Sea Cut Weir drains the Derwent floodwaters to the sea at Scalby.

The River Hertford starts close to Hunmanby near the seaside town of Filey and flows westwards into the Derwent. The management area is about 83 km² with a largely rural economy of arable farming and managed grassland in a flat to undulating landscape. The underlying rock is Corallian limestone but overlying deposits insulate the river water from this aquifer. Close to the river the land is less than 30 m high whilst to the south of the area on the slopes of the Yorkshire Wolds it reaches 100m. The river flows in a narrow heavily modified channel. Discharges from water treatment works occur at Seamer, Folkton and Hunmanby.

Having been joined by the River Hertford the Derwent turns sharply west and flows along the Vale of Pickering past Yedingham village and is joined by the River Rye four miles upstream from Malton then flows southwards. It covers an area of about 273 km² and overlies the Corallian limestone aquifer. The topography and land use are varied. The flat valley floor is less than 20 metres in height and here the dominant land use is arable farming. In the northern part of this area lies the North York Moors National Park where the land is used mainly for upland grazing and forestry. To the south are the Yorkshire Wolds and here the land rises to over 180 metres in height. There are waste-water treatment works at Thornton le Dale, East Heslerton and Sherburn.

Howsham Mill is in the process of being restored

At Buttercrambe it continues southwards and through Stamford Bridge. The above two areas have similar physical and ecological characteristics. They have a combined catchment area of 256 km². Part of the Kirkham Bridge area is underlain by Corallian limestone. The areas are predominantly rural with undulating scenery. The Howardian Hills lie to the north of Buttercrambe and the Yorkshire Wolds to the east of Kirkham Bridge. There are many scattered villages in the agricultural landscape. The land near to the river is less than 20 metres high. The River Derwent Special Area of Conservation runs through the length of both areas. Waste-water treatment works are located at Foston, Leavening, Harton, Whenby, Welburn and Settrington.

Bridge between Elvington and Sutton upon Derwent (1985)