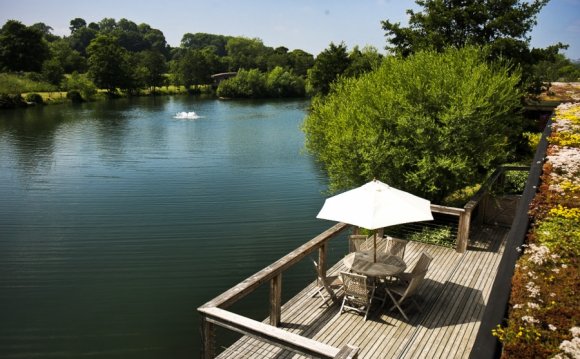 Thunderstorms and lighting hit Britain overnight but the heatwave is set to continue today with temperatures reaching 29C.

Despite the turbulent weather last night, much of the country will wake up to rather pleasant conditions today. Only areas in the north west will awake to the remains of the thunderstorms - with heavy downpours and lightning potentially posing a problem in the region.

Temperatures will remain above average today, with up to 29C expected in the south east, 24C in Manchester and northern regions and up to 21C widely across Scotland.

Scroll down for video and forecast

Striking: Lighting struck above Canary Wharf in the early hours of this morning, but most should wake up to pleasant conditions tomorrow

Topping up the tan: Temperatures soared to 30C (86F) across southern parts of the country yesterday. People flocked to parks across the country today (Hyde Park, pictured) to make the most of the weather

Soaking up the sun: One woman makes the most of the warm weather as she reclines on a deck chair in Hyde Park, London today

Kicking back: The sizzling conditions will once again trigger significant thunderstorms which will see heavy downpours later tonight

Here comes the sun (again): After Thursday's storms, the sun came out once again today prompting people to flock to Green Park, London

Missed a bit! Summer Bayes, four, enjoys an ice cream in the sunshine at Marine Park in South Shields as the UK basks in warm weather

Summer fun: Sisters Sophie Wenman, nine, and Hannah Wenman, seven, are seen playing in the sea on a beach in Lossiemouth, Scotland

Sunbathing: A couple went to the beach in South Shields, Tyne and Wear, well-prepared as temperatures headed towards the 30C mark

Those wanting to get out and about this weekend will want to do so tomorrow, with forecasters warning of a shift in condition on Sunday.

Simon Partridge, a Met Office forecaster, said: 'Saturday morning the storms should clear northwards and actually we're back to a pretty fine, dry day with plenty of sunshine.

'A couple of thundery showers are possible in the far south east but it will be mostly fine.

'Cooler air will begin to move in from the west so we will lose some of the humidity that caused the thunderstorms in the first place.

'It means Sunday will have a much fresher feel.

'It will still be about 24C in the south east, 20C around Manchester and 19C in Glasgow but there will be a lot more cloud around and it will be less humid so there will be a difference.

'Saturday is definitely the best day of the weekend.'

Heading into next week, forecasters warn the tropical heatwave will be replaced with cloudier conditions, possible rain and temperatures returning to normal.