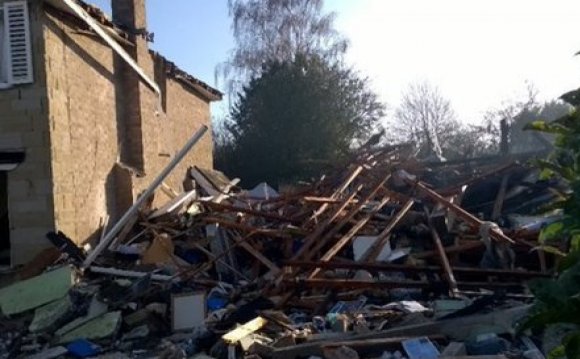 An aerial view of the house near York which exploded in an apparent gas blast. Credit: SWNS

A 63-year-old man has died after being caught up in a huge explosion which destroyed a house in North Yorkshire.

Ambulances and fire fighters rushed to the scene after the major blast at a house in Spring Wood, Haxby, at 7.30am this morning.

Pictures posted to social media showed smoke rising from the crushed remains of the two-floor home after the suspected gas explosion.

The house was 'flattened' in the suspected gas blast in Haxby Credit: ITV News

Police have declared a major incident and warned people to stay away from the scene.

A spokesman for the ambulance service said the dead man was inside the house at the time of the explosion.

Police said the victim's family were being informed.

"It will be some time before we can retrieve the body as the scene is still in a state of disarray. We need to be sure everyone is safe before doing that, " an officer at the scene added.

Two more people were also checked for injury at the scene but neither required hospital treatment.

Several other houses were also damaged in the blast, with windows blown out from neighbouring homes and debris scattered across the road.

Residents in the area have been evacuated while investigations continue.

Emergency services are still at the scene. Credit: SWNS

One neighbour said the blast had sounded like an aeroplane crash.

"The house has been completely flattened. It sounded as if a bus or something had crashed into a house, or like an aeroplane crash, " he told the Press Association.

"All the properties adjacent to the one that's blown up have got damaged windows and garages."

He added that local residents thought the house had been empty at the time of the blast.

The incident happened at 7:30am this morning Credit: ITV News