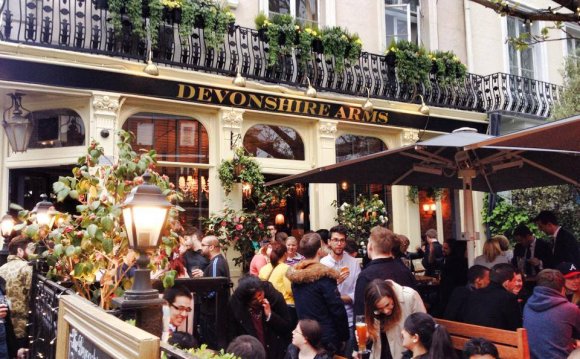 please note - reviews on this site are purely the opinion of site visitors, so don't take them too seriously.

Now a Jamie Oliver restaurant.
Been to the Devonshire for a quick 'alf on a few occasions over the years but never bothered to rate in on this site. I suspect that wasn't because I had bad things to say about it (I prefer to try and be positive when reviewing pubs), but more because there wasn't anything especially memorable about the place.

It is a firmly traditional pub along the classic blueprint that many pubs in the city now follow, which satisfies the tourist throughput and also does enough to appeal to the local passer-by too, though not perhaps distinct enough to stand-out as somewhere you'd deliberately go out of your way to come back to.

The owners are Taylor Walker who are similar in their traditional, realtively unbranded approach to Nicholson's but in my view not as ambitious; TWs are a little more pedestrian with their food and ale choices for example, although I'd say the quality of each is very similar.

I didn't eat although various punters were revelling in their 'traditional' fish 'n' chip dinners (weird as it was only 4:30 in the afternoon but maybe they'd not adjusted to the time zone yet?!). I enjoyed a reasonable half of Young's London Gold (1 of 3 cask ales available from a maximum of 4 pumps). Service was smiley and efficient.

I quite like the Devonshire in its own way; it has the edge over many similar pubs in the area because it is more tucked-away, and considerably smaller than many. It manages to evoke a little more individuality and intimacy than say the St James Tavern up the road. Will come here again at some point though this will probably be born of convenience rather than deliberate intention.

Stopped off here for a drink on the Hottest October day since records began. Aircon upstairs was a relief from the hot dusty air outside. Beer selection was good and bar staff friendly enough
After an abortive attempt to get a drink in the nearby St James Tavern, we repaired here to escape the heat of Saturday afternoon.

The welcome we got could not have been more different, with a genuinely friendly landlord and nice bar staff. It is basically a small street corner tourist pub opposite the Piccadilly Theatre, but none the worse for that and a better bet than some of its kind. There is an upstairs bar.

A reasonable pint or two of Woodfords Wherry and an excellent pint of Spitfire were had whilst the female companion shopped at Lilywhites and St Georges Day cocks were observed out and about. The food being served looked good enough and reasonably cheap for Central London.