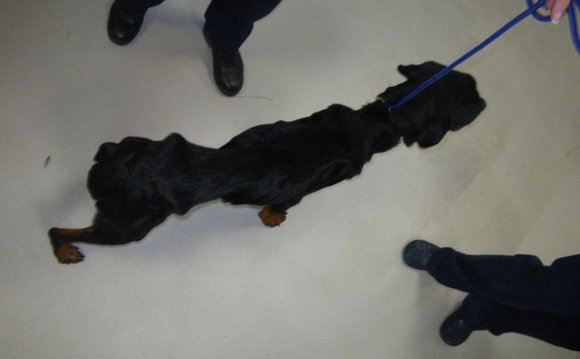 The large seabird was seen hanging suspended in mid-air above a 400ft drop from Bempton Cliffs after trapping its wing in a nest.

The RSPCA was called out at 8am yesterday and finally reached the bird at 4pm after scaling down the cliff face.

He unhooks the seabird from entangled fishing wire

Geoff Edmond, an inspector for the RSPCA, said: 'We received a call at approximately 8am on Thursday morning.

'Teams from the RSPCA and the RSPB saw the gannet trapped on the cliff in the bird's usual nesting place.

'Rescue teams scaled the cliffs in a really tough but determined exercise - it took a lot of skill and patience because there's a very severe drop and the bird was in such a precarious position.

'Thankfully the team managed to rescue the gannet by approximately 4pm and, remarkably, it was in excellent condition.

'Against all the odds, we're hopeful of a full recovery.'

The gannet will now be taken to the RSPCA Wildlife Centre in Stapeley Green, Cheshire, for rehabilitation and the RSPCA are hopeful it will be back to full health in around two weeks.