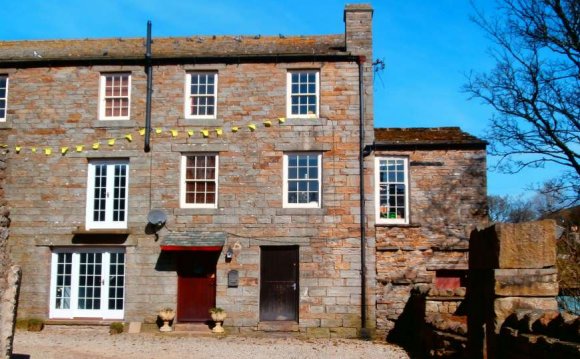 Located near where England's shortest river, the Bain, meets the River Ure, the village of Bainbridge is one of the longest established settlements in the Yorkshire Dales.

Originally called Virosidum, it was an important centre during Roman times with roads branching off to the south and south-west. The one to the south can be traced for around eight miles, past the slopes of Stake Fell and to the ridges which separates Wharfedale and Wensleydale.

The remains of a Roman Fort can be seen at Brough Hill, just across the river from the village. The foundations of the fort cover more than two acres, and while the stones that once stood on the site have long since been removed, the outline of the fort is very visible.

Although settlements have existed in the area since at least the 1st century, much of the region was covered with a thick forest until Conan Earl of Richmond decided that a clearance was in order before the village and its manor at it stands today was started in 1146.

Several streams around Bainbridge feed into the River Bain and flow onto Semerwater, the second largest natural lake in North Yorkshire. Many people use Bainbridge as their base when travelling to the lake to take part in water sports such as windsurfing and canoeing.

A local legend claims that a city once stood on the site of Semerwater, but the area was flooded by an angel who had been turned away by the city's folk after asking them for food and drink.

Only a poor couple who took the angel in and treated him kindly saw their property survive.

"Semerwater rise, and Semerwater sink, And swallow the town all save this house, Where they gave me food and drink, " the angel said and the waters rose to engulf the city, drowning all the inhabitants with only the couple being left unscathed.

A leading attraction for families in the area is the Dales Countryside Museum in Hawes, four miles away. Open between 10am and 5pm each day, the museum has interactive exhibits that tell the story of the Yorkshire Dales and its people. It also hosts regular events such as food festivals and crafts demonstrations.

Another popular destination is the waterfalls at nearby Aysgarth. The tiered falls are a real spectacle and provide a stunning backdrop to a number of scenic walks. They were even featured in the 1991 hit movie Robin Hood Prince of Thieves.

A little further afield in Coverham lies The Forbidden Corner, a weird and whacky place where visitors can travel through a network of tunnels and chambers with tricks and surprises at every turn.

The folly was original built for private use by CR Armstrong CBE, but has been opened up to the public and has won a string of accolades including 'Best European Folly' by the Folly Fellowship and best attraction for children in Yorkshire.

There is only one watering hole in the Bainbridge and it claims to be the oldest in Yorkshire with a history going back to 1445. There are also several tearooms, a village shop and a butchers, while riding lessons can be booked at the village Equestrian Centre.