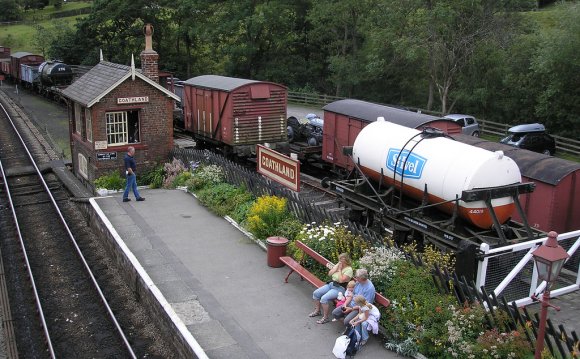 'Ash Tree Cottage, the W&P's overseers house situated at the top of the incline

Little is known about what facilities the horse-worked W&P provided at Goathland, they did build an 'overseers cottage' at the head of the incline, that cottage survives, now known as 'Ash Tree Cottage', it is probably the only surviving inhabited W&P structure.

The incline built to the design of the W&P's Engineer George Stephenson was self-acting with the descending traffic hauling up the ascending traffic. The descending coach or wagons was given additional weight by means of a wheeled water butt, which was filled before descending, then drained at the bottom and returned to the top with the next ascending load. The machinery for working the inclined plane was obtained from Robert Stephenson at a cost of £135 14s 6d. The original rope for the incline manufactured by Mr. Henry Simpson was 1, 500 yards long and 5.5 inches in circumference.

The W&P built a stable 'at the top of Goathland Inclined Plane', the directors accepting a tender from a Mr. Langdale of £230.

What can be seen today[edit]

At a first glance the unattuned observer would hardly realise that there had been a railway, never mind a station on the site of Goathland's first station. However the presence of a 'Historic Rail Trail' following the original alignment gives away the one-time presence of a railway. In the adjacent image the worn track on the grass roughly follows the track alignment. In the distance can be seen the Y&NM terrace (with three distinctive chimney stacks), one (modern) house beyond that stands 'Ash Tree Cottage', the W&P's cottage at the head of the incline. The incline itself starts just out of sight, about where the path disappears.

Nearer at hand and to the right of the trackbed can be seen the remains of masonry. Those nearest the camera may be the remains of the turntable pit, whilst the further ones may have been part of the 'engine house' (the winding engine). The marked depression under the tree to the right may also be a due to the turntable pit. The small engine shed would then have stood somewhere to the right of the photographer. It is likely that the (later) winding engine house with its two chimneys, would have extended at least into the garden of the end house, if not under the house itself.

Only a thorough archaeological investigation, initially (at least) non-intrusive, can confirm what traces remain of this pioneer railway station and confirm (or not) the interpretation of the remains visible in the image.

Trains crossing over at Goathland station on the North ...